In 2014, Narane Junior, owner & founder of Groovy Veg, moved to Germany and made a new home in Brodowin. The move was quite the culture shock, but Narane quickly settled in and started working with a few local farmers. These opportunities not only allowed him to pick up the language but also to engage with different agriculture techniques and explore different aspects of ecosystem health. 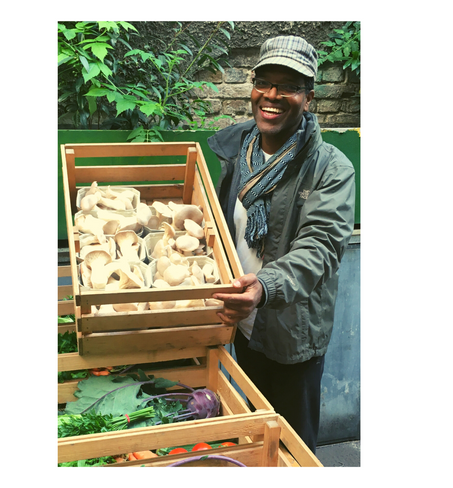 Back in the UK, Narane was studying how ecosystems interact and impact climate change. “Through the theory of nonequilibrium dynamics, I found that ecosystems are able to self regulate” Narane says, “the more diverse your ecosystems are, the more resilient.” After some time, he began wondering how he could implement this knowledge and inspire some change in the production models he saw around him. For example, why is it that instead of growing carrots in Germany, we import them from Poland? Often it is related to labor standards, which are lower across the eastern border -- a form of capitalist exploitation. There must be a better way.

But building community around the idea in Brodowin did not come as easy as one may think. From Narane’s experience, the spirit of entrepreneurship in the former GDR is quite low. In the past, many of these farmers grew what the state told them to grow, and the state bought at a set price. This system continues in its modern form: agricultural subsidies distort the market and allow many farmers to remain comfortable with things just the way they are.

A vision of community and self-sufficiency

So unfortunately, Narane hasn’t come across many people who have an interest in his vision for changing the local food system. Even attempts to go at it alone proved challenging, as most financial institutions would only offer him a loan after proof of a profit-driven, 3-year business plan. “The money comes when returns can be shown,” Narane tells me, “banks are not here to improve humanity -  they don’t see the long term beauty in the vision.”

And the vision, at its core, is quite simple. Narane believes we need to be building a food system that supports functional bodies and brains, then we can start to really think about how we can change the world around us.  “We must consume, but how can we do this in a respectful and regenerative way?” For Narane, respecting nature requires both a spiritual and social component, rather than just an economic one. He is passionate about natural ways that we can live and produce food, and this passion became the cornerstone that started Groovy Vegetables.

The way Narane sees agriculture and the food system is through a lens of abundance. “Abundance is possible, but capitalism stripped us of this abundance in exchange for a scarcity mindset which encourages us to look at one another as competitors, rather than as community members,” Narane says. “Our perception of farming is very tied to colonial mindset around agriculture. Slavery supported an agricultural economy, so farming became seen as a low class occupation, done by non-educated, poor people,” Narane explains. Many people still devalue farmers in this way, and this must change.

Narane likens the struggle we need for food sovereignty and self-sufficiency to the civil rights movement. “We need a movement that is multi generational, multi-cultural and classless,” he says, “we the consumers, the taxpayers, we disrupt the market by how we consume and this requires community organisation.” However, people change when they have a need to change. The need to change the food system, or act against climate change, is a growing but not yet widespread movement. We need bottom up, grassroots action, just like in the past.

Inspiring through action and customer service

Narane aims to inspire people to understand the potential for positive change. He wants to facilitate processes that allow people to make better choices for their health and demand it through their food purchases. Groovy veg does this by allowing the human-ness of the farmer to shine through. All veggies bought through the company come from a small farm in Hohenfinow called GemuseWerk,  a 3.5 hectare space managed organically and cultivated by partners Andre and Tatiana, with help of their two children and adorable black labrador.

When customers come to pick up their veggie boxes each Thursday at Neukoln’s Refugio Cafe, Narane greets them with his timeless charm. He takes time with each person to provide a thorough instruction of what they are receiving in their weekly basket. He even shares some personal recipe suggestions to inspire new ways to enjoy the produce. This small but important attention to customer service works to instill a sense of appreciation for the food and help curious consumers experiment in their kitchens.

In the future, Narane would love to create a platform where issues such as the roots of agriculture (slavery and capitalism) and the perception people have of farmers can be discussed and overcome. For now, he brings the value - the story, the taste, the lives behind that production, directly to consumers, and his customers resonate with that. They value humanness and align with Narane’s belief that reciprocity is natural to the human relationship - if you are good to others they will be good to you.

With 30 customers receiving boxes each week in Berlin, Gemusewerk’s production was at capacity, and now, after the lull in sales and accessibility to customers brought on by the pandemic, Narane has decided to close Groovy Veg and pursue other endeavors. He will continue working with small-scale sustainable and ethical farmers but at limited capacity through his local, bio-store called Wanderbird in downtown Brodowin. Here, customers can also pre-order a fresh veggie box and pick it up when in town for a visit. A small line of preserves like jams, chutneys, pestos, and salted lemons, as well as arts & crafts created by members of the local community, will be available at the shop too.

Bringing back and expanding Groovy Veg in the future is not completely off the table, but this would require more buy-in from other farmers in the area. So far there has been very little interest in transitioning to the type of organic farming Gemusewerk implements. Many local producers spray chemical fertilizers on their fields because, well, it’s easy. Many of them know the risks of pesticides in industrial agriculture in terms of human health, but they don't seem to care. “The farmers around seem to feel like they will get sick with something at some point,” Narane explains. Many of them also shop first at supermarkets rather than visit their neighbor’s farm stands on a regular basis.

Surely there are many layers to why these farmer’s feel and act in this way, but one aspect is most certainly a lack of supportive policy toward a transition in agricultural techniques. A more robust, engaging and inclusive conversation about the importance of that transition among those whose livelihoods will be affected is also needed. A vision like Narane’s is sorely lacking in the agricultural ministry. Restructuring policy processes toward a greener, more regenerative agriculture sector means that the way things are being done must change. It will be complicated and uncomfortable, but it is necessary. I look forward to seeing how we come together and make it happen.