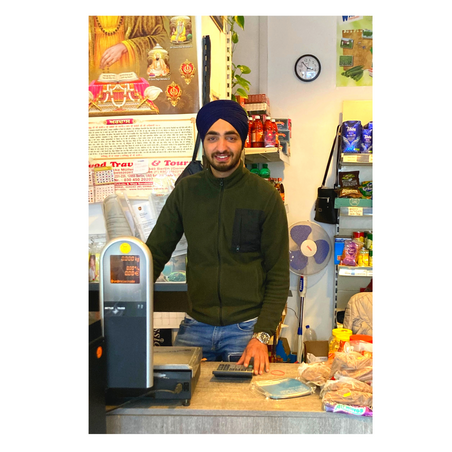 A short 15-minute walk north of the crowded pedestrian shopping streets around Wilmersdorfer Arcaden is a local food shop called Katar Foods. I learned of it through social media, when someone posted about it with high praise for the range of products the tiny shop had to offer - particularly the amount of perfectly ripe plantains. I noted the name and decided that I would stop by to check it out for myself.

I was greeted by Joban (the guy in the picture) and his mother, Sarbjit. Joban told me that in 2016 Sarbjit and her husband opened the shop with the aim of providing staples of Indian cuisine so that Indian immigrants in Berlin could cook traditionally in their homes. At the time, the couple felt that access to traditional ingredients in the city was low. Many Indians living in Berlin desired to cook meals they were familiar with, but the ability to create such dishes was severely lacking.

At least that is how Joban explains it. He says that although there were and continue to be countless (500+ from my estimations) Indian restaurants across the city, food stores specializing in Indian cuisine continue to be few and far between. I’ve learned from other friends in the Indian diaspora community that Tamal food staples have been available in Berlin for more than a decade, particularly a shop on Wrangelstrasse in Neukölln which used to have some fresh ingredients. Today, the majority of ingredients that one may need can be found, though fresh curry leaves, okra, or lady fingers for example, continue to be hard to find.

Katar Foods, however, seems to be the only food shop in Charlottenburg specializing in products for Indian cuisine, and again, one of only a handful of them in all of Berlin. There are of course plenty of East Asian food shops in the city, whose shelves are filled with similar brands and spices, like those from TRS, a UK company that has grown to be “one of the largest suppliers of ethnic foods within the European market place.” In fact, many products seem to come through England. Then there are also the big suppliers that work in Germany, like Sona Food.

Katar gets their lentils and spices from TRS, but has direct trade partnerships with a company in Delhi for the import of rice and flour. From what I understood, these direct trade relationships are due to the quality ensured, a characteristic of local and more sustainable food systems that is becoming more and more common.

The Indian community in Berlin has grown substantially in the last few years. Many young students come to study, while many young professionals have also immigrated for job opportunities. At the same time, Katar Foods has grown to offer a mix of Indian, North African and some Asian food and non-food items. Joban explained that the shop attracts many different types of clients, so having a wide variety of products has grown in importance over the years.

From its humble beginnings of serving the Indian community of Berlin, Joban shared that he now welcomes many different people from the local neighborhood on a daily and consistent basis, something that he seemed quite happy about. If you are ever in the neighborhood, make sure to stop by to say hello!